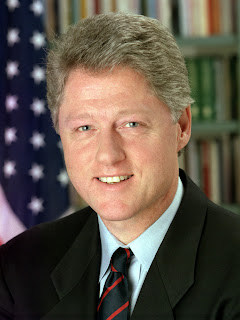 When giving stand up presentations, people are often unsure of what to do with their hands.  Here is where the Clinton Box comes in.  Bill Clinton, back in the 90's, was known for not always using his gestures effectively - and was quickly told to keep his gestures above the waist and below his shoulders. Additionally, for groups of less than 50, his gestures should also not extend very far beyond the width of his shoulders. This is a speaker's 'safe' zone for gesturing. In effect... don't touch anything above your shoulders and certainly nothing below your waist!

Bill went on to be a very polished and effective speaker but the Clinton Box was born from his tendency to gesture 'outside of the box', getting himself into some difficulties with his audience and, in particular, the press.
Posted by Cindy Dachuk at 11:50 AM