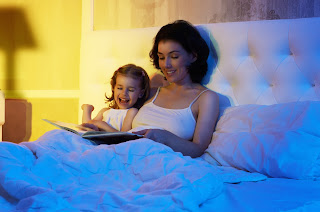 Most of us can think back and recall warm moments when we were young, sitting cuddled on a parent's lap while they read to us. As adults we can also remember replaying those same moments with our own children or with beloved nieces or nephews. What is it that we were sharing with these children of ours? Warmth? Love? Caring? A love of books? Perhaps all of these elements. Interestingly, though, we may have also shared more than we intended, especially when it came to shaping the minds and belief systems of our young daughters and nieces.

A 12 year study was conducted of top award-winning children's books. The study was undertaken to review the hidden messages that we inadvertently communicate to our children. The results?

Other favoured female occupations? You have to know that teacher and princess were in the top ten!

Now, think back to your favourite stories from your childhood. How correct is this study? If you're like most of the women we've spoken to, the above figures are a fairly accurate reflection of the stories they were told when young. Most of the women remember best the stories of Snow White and Cinderella. In each story the female lead character was a victim that needed 'rescuing'. By a prince, no less.

How too did these stories impact the perceptions and expectations of others around us? One female senior executive shared her struggle to 'make it' in the world of engineering.


"What was most interesting to me was not the resistance that I got from the men in my classes or from the work-world. I expected that. It was the resistance that I got from my mother and grandmother. The field that I had chosen for myself just didn't fit with their expectations. They had wanted me to be a teacher. It's funny now though. The aspect of my job that I enjoy the most is coaching and mentoring young women in engineering. Guess I'm teaching after all!"

This is an example of a woman that fought against some of the stories she was told as she grew up. How many of us though still hold many of those stories in our heads, measuring ourselves against them each day? How often do we come up lacking?

Think of our seeming need to express and measure our womanhood by the cleanliness of our homes or the number of after-school activities our children are engaged in. How many of us think we are somehow lacking if we 'fail' to make home-cooked meals for our families, feeling guilt overcome us each time that 'Martha' appears on screen?  After all, baking from scratch is 'A good thing' right?

Whatever happened to telling our daughters about women that struggled to manage raising three kids and hold a full-time job? A woman that might not have managed to have the house perfectly in order, the smell of fresh bread baking when others awoke or a drink in hand for hubby when he came home, but a woman that managed to have a hug and kiss for her kids when she saw them at the end of their school day, despite having gone to work with baby spit-up on her collar, getting yelled at by the boss for something he forgot to do, putting a run in her hose while trying to juggle two sacks of groceries and the dry cleaning out of the car, while mentally wondering what would defrost quickly enough to feed everyone?

Spend a few moments right now thinking about the stories you hold in your head that create images of perfection that just don't fit with life today. I don't mean your life, I mean anyone's life! What ideals are you holding yourself to that leave you feeling like you're always falling short, despite all of your best efforts?

Only by coming to understand what these myths and stories are can we begin to refute their relevance to our lives. Once we acknowledge the stories we're still holding onto and the fallacies they represent can we then recognise and appreciate in ourselves how much we've done and continue to do.

Ultimately, it's up to us, because there is no fairy godmother or knight on a white horse in our world folks. We need to consciously create the standards we're trying to live up to and not be driven by comparisons to some story we were told by others. We need to start telling ourselves better and more realistic stories because I'm willing to bet that even Cinderella had trouble fitting into that damn show after she turned 40!