How to Create Instant Rapport

For most of us, making connections with others is never easy.  They take time, which is definitely in 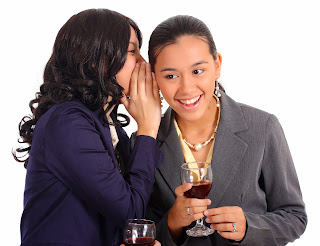 short supply during events such as networking gatherings.  As a result, we leave the evening with a few business cards clutched in our hand but little real feeling that we made any kind of lasting impression, let alone a real connection.

There is interesting research out there that shows quite clearly exactly what we need to do to form instant rapport with someone. I feel it necessary to share with you first though that this is going to fly in the face of everything you have been told in the past.  You know, the advice of what topics to steer clear of (like politics and religion), to only say positive things, to keep things light and upbeat. As it turns out, talking with people about these `safe` topics may help you form connections, but nothing as quick or as strong as...

Yep, the number one most effective way to form instant rapport with someone is to say something negative about someone else. Gossip that drives a revelation of a shared negative attitude will typically result in a strong emotional bond. What`s interesting is the `why` behind its effectiveness.

Gossip is usually around someone who is a perceived threat in some way, however large or small. This has been going on since caveman days where all perceived threats were taken seriously. It was a life and death issue back then. As a result, sharing information about those potential threats was a critical safety need for us and our tribe. Our brains are still hardwired to serve and protect us and therefore we respond to shared information and gossip about potential threats.

When first meeting someone we are obviously not privy to information about their personal internal competition but the gossip we share need not be about someone we know personally. It could be about a public or political figure. Since we don`t know them well we speak instead about specific traits they exhibit, policies, actions they have taken, behaviour they have engaged in.

The common advice given is to find shared experiences to explore with the other party. Perhaps reference pictures or books they have in their office. However, the positive experiences are those that are typically readily shared. They have spoken to many about them and, as a result, connections don`t hold firm.

People don`t tend to put their negative beliefs on display. Therefore, when we discover something the other party doesn`t like about someone else, it`s a real discovery. This is not something they share openly or with as many people which means you`ve instantly become part of a much smaller and more exclusive group of people.

We all have a strong tendency to seek out information that confirms what we already believe to be true, rejecting information that is in conflict with it. If you tell people that what they know to be right is indeed right, they will feel more connected to you.

Although constantly gossiping about others is not a good long term success strategy, know that a few well placed negative comments early on in a conversation may go a long way to establishing a connection and providing an opening to continue the conversation. And really, all we`re typically looking for is the time needed for us to really share who we are and what we`re all about.

As it turns out, contrary to the belief that we should steer clear of discussing politics in any first meetings, it may have just held the secret to creating instant rapport with our audience. After all, who doesn`t have a negative comment or two they could share about politicians these days?