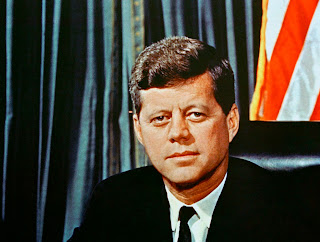 Although we may focus on the 'big' strategies of branding, there are often small things we can do that help to reinforce our desired messages.  For instance, if you want to be perceived as being 'intelligent' and 'credible', consider including a middle initial to your signature line.

An additional study found that participants using a middle initial were selected far more often for an academic competition than were those without one.  The advantage may be slight, but it proves to be an advantage none-the-less.

Job seekers may want to take particular note.  It certainly worked for the likes of John F. Kennedy and Franklin D. Roosevelt!
Posted by Cindy Dachuk at 7:39 AM