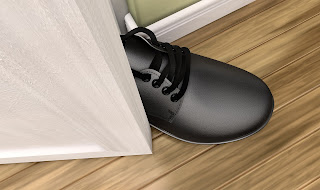 The Foot-in-the-Door influence technique has been proven to be highly effective in getting people to agree to a large(ish) request you have of them.  Instead of asking them straight out, risking a 'no', you start by asking them for a small favour first.  Having already done you a favour they will be more likely to say yes to helping you with the larger item.  New research has found that the Two-Feet-in-the-Door technique actually works better in gaining acceptance for a large request.  Make your request in three phases (a small, then medium, then the large request) rather than jumping to the large request straight from the small. Although you may have to stretch the influence attempt out over a longer period (week or two) you increase the likely payoff.  Now... could you bring me a chai?
Posted by Cindy Dachuk at 8:36 AM