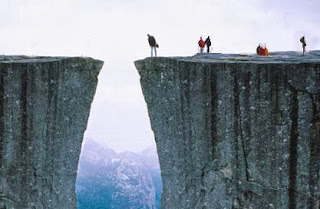 Viktor Frankl was the author of Man's Search for Meaning, he was a Jewish Psychiatrist and a Holocaust
survivor (of Auschwitz and Dachau).  One of the greatest messages he brought with him through all that he experienced and suffered during his internment was that most who survived did so because of the way in which they chose to view and respond to the situation they faced.

The stimulus they faced in the camps was deprivation, torture and uncertainty.  Their response often was to lose hope and to give up.  Those that chose this path, Frankl discovered, often just withered away and died.  Those that determined they had a reason to live, did so because they shifted their response.  It was in how people managed the gap between the stimulus and their response to it that, ultimately, determined survival.

When a stimulus is applied we have built-in responses to it, responses that we have conditioned over time, similar to Pavlov's dogs salivating at the sound of a bell.


All of these may be conditioned responses, operating unconsciously, but they exist because we set them up to be our preferred response at some point.  Good news though, we can condition a new response!  Despite the fact that it feels like a direct and instantaneous route from the stimulus to our response (feelings) there is actually a gap in there, providing us with the opportunity to assess the stimuli and determine our responses.

Most of the time we simply opt for easy and therefore siphon the response off to our conditioned default setting.  But we can break this pattern if the result is not desirable.  There are three key steps to creating the right foundation for the shift to occur.
Master these three steps, commit to them, identify your new response and... you can change it in an instant.  Managing the Gap is not always difficult, but it is necessary if you want to change your responses.  It doesn't even matter if you 'see' a gap or not.  Trust that it's there, believe the change is within your control and step into the new behaviour/response.

Wrong action won't bury you, but wrong reaction will.  You cannot control your outer circumstances but you can control your inner choices.   Darren Hardy (Success Magazine)