Building Habits - One Step at a Time 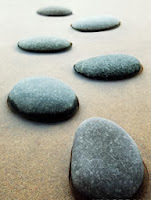 If you're like most people, you've likely got some bad habits kicking around that you would like to change,
or perhaps have some 'good' habits you'd like to adopt.  Possibly you have even tried stopping a bad habit in the past (or starting a new good one), only to abandon the attempt as it proved too difficult for you to achieve or stick with.  For some people, the all-or-nothing approach works.  They define the 'new' habit or system they want to adopt, replace the old ineffective one with it, and... keep doing it until it is comfortably ensconced as the new habit.  They make it seem easy.

For many of us though, it's much more of a struggle.  We want to lose weight, exercise more, stop smoking, meditate, read more, get up earlier... we have endless lists of things we'd like to do that prove almost impossible for us to make happen.  We then get demoralized by our attempts and settle in trying to 'live with' the fact that we just aren't cut out to be thinner, healthier, smoke-free...

In these cases, we need to try a different route to our end goal, not to abandon it as unobtainable.  We need to take a more counter-intuitive route.  Consider the following.  When IBM had the most dominant sales force of any organization, they did so by assigning their team the lowest sales quotas of any of their competitors.  The thinking was to give their sales force quotas that weren't daunting.  They wanted their people to feel that the goal was obtainable, not to be too intimidated to even begin.  They found that not only did their sales people pick up the phone and start calling, they worked to exceed the assigned quota.

The idea then is to start small.  Give yourself a target that is so easily achievable that you can't help but to exceed it, creating an instantaneous win.  By the time you have reached that point you have likely created enough momentum that you continue a number of steps beyond your target.  Reaching a goal is always motivational.  Exceeding your targets... more so.  It becomes self-perpetuating.

If you want to... start flossing your teeth every day, start out by planning to floss only one tooth.  Odds are... once you've flossed one, you can't help flossing them all while you're at it.  Finding the time in your morning routine to floss your teeth every day can seem like too much time that you don't have.  Flossing one tooth?  Much easier to fit into your schedule.

If you want to... begin running 3 kilometres every day, start out by planning to just run around the block.  Odds are... you'll begin to find that once you're dressed and out there, you'll run further.  Perhaps not every day to start but you'll hit days where the sun is shining, your stride feels smooth... and away you go.

If you want to... write a book, start out by planning to write 2 crummy pages a day.  Not good pages, crummy pages.  Who couldn't write two bad pages?  Odds are... once you sit down to write you'll find you hit a groove and write more, and better.

In each example, we have set a low enough target that it is not intimidating.  Often, the biggest hurdle for people to face is simply in starting.  Make the target low enough that beginning isn't an issue, that you are excited to start because you think... 'I can do that!'  Once we start the second biggest hurdle kicks in which is sticking with it.  When the goal is set too high we can easily become discouraged or demoralized.  It becomes easy to abandon our attempts, believing we'll never make it, that we aren't cut out to do it.  We quit before the new habits have a chance to take hold.  If we get our wins early in the game though, if we build it in such a way that we exceed our expectations consistently, then we have built in the positive reinforcement of our efforts.  We continue.

When we're looking to change our habits what is important is not how fast we make it happen, but that we make it happen.  If the all-in approach works for you... great!  If not, try the approach described above.  Both paths get you to the same end destination.  Which route you take to get there will only be questioned by those who want to replicate your success.