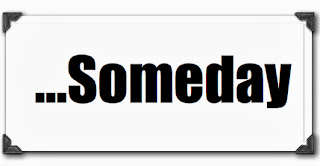 The Someday Syndrome is a real phenomenon and, without even knowing specifically 'who' is reading this post, I know you have each suffered from it at some point, if you are not suffering from it now.  It is that pesky thought that...


We have all heard ourselves say this at one point or another, but it's important to recognise the negative influence that the word 'Someday' has upon our accomplishments, experiences and dreams.  It is a form of procrastination.  While Procrastination is the habit of putting off something that you need to do, but don't want to do, the Someday Syndrome has you putting off something that you want and dream of doing.  Why would we and do we do this to ourselves?

Our use of the word 'someday' becomes an excuse to not take action, serving almost as a 'free pass' of sorts because we are not openly denying that we'll take action, we are simply deferring it to some later point in time.

Our Somedays then come to represent the collision between our good intentions and ideas, with our excuses.

We are fooling ourselves into believing that we will get to it eventually.  However, every someday lacks a specific 'start' time, resulting in us simply waiting for 'someday' to come around.  Our weeks have a lot of 'days' in them but... none are named 'Some' and we therefore keep waiting for the right day to roll around.

Instead, we need to shift Someday to This-day.  When is a good time to start, if not now?  Use the following steps and ideas to help you eliminate the Someday Syndrome from your life!
Turn all of those Someday dreams into reality by shifting the way you think about them.  If there is Some-thing you are thinking of doing Some-day then you need Some-one (you!) to step up and take action, shifting Some-day to This-day if not to To-day!